Antiparos is a small island in the southern Aegean Sea, at the heart of the Cyclades, which is less than one nautical mile (1.9 km) from Paros, the port to which it is connected with a local ferry. Saliagos island is the most ancient settlement in the Cyclades, and Despotiko, an uninhabited island in the southwest of Antiparos, is a place of great archaeological importance.

The Community of Antiparos was founded in 1914 and was promoted to a municipality in 2010 with the implementation of the Law "Kallikrates", under the principle of "each island a municipality". It occupies an area of 45.182 square km, including the island of Antiparos and Despotiko. It has, according to the 2011 census, 1,211 permanent residents and a density of 27 inhabitants per km². The island's economy is based on tourism, fishing, farming and less on agriculture in the plains. It is known for its distinctive Cycladic beauty with white houses, cobbled streets and beautiful flowers that thrive in the yards of the houses. It is a popular tourist resort in the summer for Greeks and European visitors, as well as land investors from the United States.

The main settlement lies at the northeastern tip of the island, opposite Pounda on the main island of Paros, whence a ferry sails for Antiparos harbour. The historical center is located in the Venetian castle of Antiparos, which is connected through the shopping streets in the picturesque coastal street. Other settlements are the famous resort of St. George in the southwest edge, Soros and Kampos and popular beaches in the wider area of the center are Psaralyki, the Sifneiko, Ag Spiridon and the camping beach. The most popular beaches are: Soros, Glyfa, Apantima, Monastiria.

The island of Antiparos is located 0.8 nautical mi (1.5 km) southwest of Paros, separated by the Strait of Antiparos, known as Amfigeio. It lies 8 kilometres (5.0 miles) from the port of Parikia from which the passenger ferry runs. The maximum length of the island is 11 kilometres (6.8 miles) from north to south, while the maximum width reaches 4.5 kilometres (2.8 miles).

Antiparos is a volcanic rock and dry climate with high moisture, and morphology favors the development of strong winds. The flowers thrive in the region are mainly bougainvillea that adorn the gardens, houses and shops. The morphology of Antiparos is characterised essentially flat, with many small hilly peaks, while the vegetation of the island is low. The island of Antiparos is surrounded by many small uninhabited islands with great historical and archaeological interest, such as Tsimintiri the Round, the Double, snow, Revmatonisi, the Red and Black Tourlos. Particularly well known in the international community is Despotiko, an uninhabited island west of Antiparos, where in recent years excavations of great archaeological importance have been carried out.

Antiparos is a whitewashed ensemble bathed in bold brushstrokes, in the clear blue Aegean Sea. It is an historic place of international interest. Monuments and symbols speak to us of the figures that lived on the island, creators of the unique Cycladic Civilization, creators of our history.

Today, thousands of tourists visit the island to admire one of the most beautiful and most ancient caves in the world, the archaeological sites, the amazing views found scattered in every corner of our island, the beautiful and clean beaches, the picturesque flagstone-paved lanes, the fresh fish, the grilled octopus... 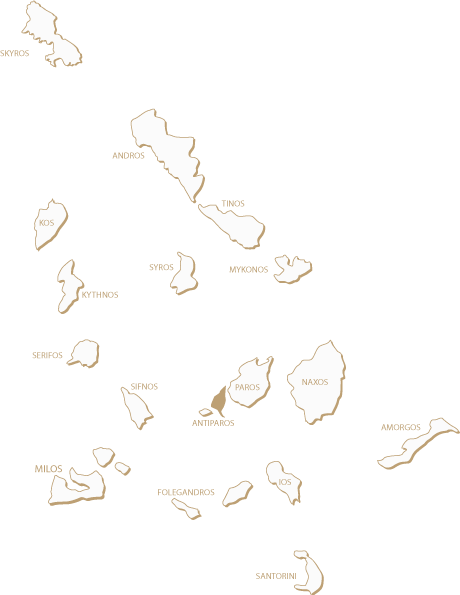 The isle of Antiparos, lying southwest of Paros, is ideal for a relaxed and serene holiday and can easily be reached from Punda or Parikia by boat. The ancient name of Antìparos was Oliaros.

SEARCH PROPERTIES
IMPORTANT INFO
CONNECTION WITH PAROS
THE CAVE OF ANTIPAROS
PICTURESQUE FISHING PORT
TURQUOISE CRYSTAL WATERS
DESPOTIKO ANCIENT LEGACY
FAMOUS FOR ITS TRANQUILITY
PICTURESQUE FLAGSTONE PAVED LANES
UNSPOILT ISLAND CHARM
ENCHANTING SUNSET VIEWS
OUR OFFICE IN PAROS
We operate from our branch office in Paros, located at the central square of Naousa, just aside the well-known Stone Bridge at the entrance of the village. We would be glad to meet you there!
OUR OFFICES