Milos is a volcanic Greek island in the Aegean Sea, just north of the Sea of Crete and is the south-westernmost island in the Cyclades group located 120 kilometres (75 miles) due east from the coast of Laconia. From east to west it measures about 23 km (14 mi), from north to south 13 km (8.1 mi), and its area is estimated at 151 square kilometres (58 sq mi). The greater portion is rugged and hilly, culminating in Mount Profitis Elias 748 metres (2,454 feet) in the west.

Like the rest of the cluster, the island is of volcanic origin, with tuff, trachyte and obsidian among its ordinary rocks. The natural harbour is the hollow of the principal crater, which, with a depth diminishing from 70 to 30 fathoms (130–55 m), strikes in from the northwest so as to separate the island into two fairly equal portions, with an isthmus not more than 18 km (11 mi) broad. In one of the caves on the south coast, the heat from the volcano is still great, and on the eastern shore of the harbour, there are hot sulphurous springs.

The municipality of Milos also includes the uninhabited offshore islands of Antimilos and Akradies. The combined land area is 160.147 square kilometres (61.833 sq. mi.) and in the 2011 census population was 4,977 inhabitants.

Antimelos or Antimilos, 13 miles (21 km) north-west of Milos, is an uninhabited mass of trachyte, often called Erimomilos (Desert Milos). Kimolos, or Argentiera, 1.6 km (0.99 mi) to the north-east, was famous in antiquity for its figs and fuller's earth, and contained a considerable city, the remains of which cover the cliff of St. Andrew's. Polyaigos lies 2 km (1 mi) south-east of Kimolos. It was the subject of dispute between the Milians and Kimolians. It is now uninhabited.

The harbour town is Adamantas; from this there is an ascent to the plateau above the harbour, on which are situated Plaka, the chief town, and Kastro, rising on a hill above it, and other villages. The ancient town of Milos was nearer to the entrance of the harbour than Adamas, and occupied the slope between the village of Trypiti and the landing-place at Klima. Here is a theatre of Roman date and some remains of town walls and other buildings, one with a fine mosaic excavated by the British school at Athens in 1896. Numerous fine works of art have been found on this site, notably the Aphrodite in Paris, the Asclepius in London, and the Poseidon and the archaic Apollo in Athens. Other villages include Triovasalos, Peran Triovasalos, Pollonia and Zefyria (Kampos).

Milos is now becoming a more and more popular tourist destination during the summer period. 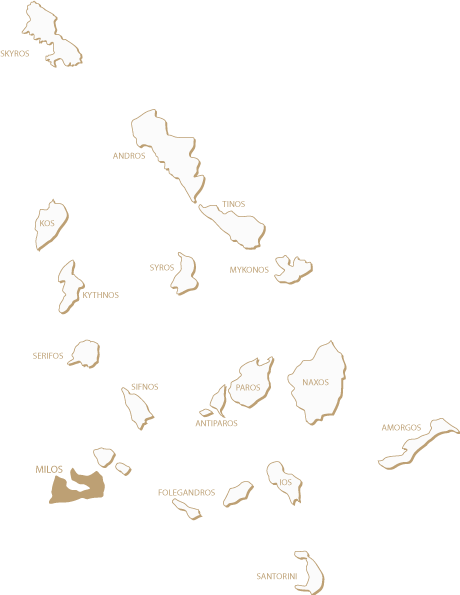 AN ISLAND OF BEAUTY

Milos is located in the extreme South-West of the Cyclades. Because of its exciting coastline with small bays and its original architecture, more and more admirers of Milos decide to buy a traditional house or a charming villa in Cycladic Style on this beautiful island.

SEARCH PROPERTIES
IMPORTANT INFO
AIRPORT
PORT
MARINAS
MEDICAL CENTRE
UNIQUE GEOMORPHOLOGY
VAST COASTLINE
CRYSTAL CLEAR WATERS
ARCHAEOLOGICAL HERITAGE
CONNECTION WITH NEIGHBORING ISLANDS
OUR OFFICE IN MILOS
Our branch office in Milos is located in Adamantas, just a few meters away from the main junction of the village. We would be glad to meet you!
OUR OFFICES