Sifnos is a Greek island that belongs to Cyclades lyring between Serifos and Milos and in the west of Paros Its approximately 182km from Piraeus (less than 3 hours by boat. The municipality of Sifnos has an area of 73.94km² and the permanent population is about 2.600. The island includes ten different settlements with Apollonia as the capital and Kamares as the main port and, not to forget the beautiful Kastro (castle) which is a proof of the former domination by the Venetians.

Sifnos is an island with significant historical account, probably because the ground that was rich in gold, silver and lead. When you reach the island, you will be impressed by its natural beauty, extended sandy beaches and by its original architecture of the villages, showing the wealth of the island in the past. A lot of temples can be found still on the island. Nowadays you can find 227 churches between the unique traditional villages.

The connection to the Ancient times is still visible through the names of the villages. Like Apollonia which is named after Apollo, god of light, and it has been built in an amphitheatre shape. Artemonas the next biggest village, nearby Apollonia, is named after Artemis, the twin sister of Apollo, goddess of wilderness and fertility.

Sifnos is an island with a modern road network connecting every settlement. Also, the marvellous hiking routes have been recently restored and are fully way marked and sign posted according to European standards. Some of them connect the settlements and some lead to archaeological sites or to alienated beaches, like Vroulidia and Panagia Poulati.

Every year, at the beginning of September, the village Artemonas hosts the "Nikolaos Tselementes" Cycladic Gastronomy Festival. It is a three-day festival, which has become an institution and is internationally recognized.

As a summary Sifnos stands for: plenty of activities such as walking, biking, swimming, enjoying the impressive architecture and once a year hosting one of the most famous gastronomic festivals of Greece. Sifnos is rich in many aspects. Our team will be glad to assist you to discover it! Maybe your stay for a break on Sifnos might turn out in your desire to settle down on the beautiful spot of the Cyclades. Here we are to help you further …. 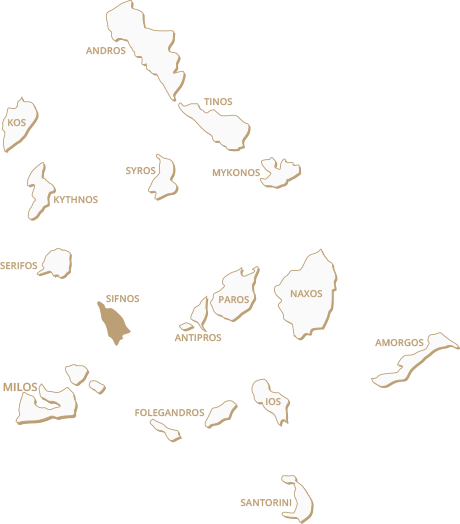 A marvellous trip through different scents and tastes can accompany you in the small lane which lead to beautiful beaches and to archaeological sites, you can discover the beauty of Sifnos, a small island of Cyclades that can sweep you off your feet.

FIND YOUR OWN PLACE IN SIFNOS