Paros is a Greek island in the central Aegean Sea. One of the Cyclades island group, it lies to the west of Naxos, from which it is separated by a channel about 8 kilometres (5 miles) wide. It lies approximately 150 km (93 miles) south-east of Pireus. The Municipality of Paros includes numerous uninhabited offshore islets totalling 196.308 square kilometres (75.795 sq. mi) of land. Its nearest neighbour is the municipality of Antiparos, which lies to its southwest.

Historically, Paros was known for its fine white marble, which gave rise to the term "Parian" to describe marble or china of similar qualities. Today, abandoned marble quarries and mines can be found on the island, but Paros is primarily known as a popular tourist spot

The isle is located in the heart of the 24 inhabited islands of the Cyclades and because of its central location, it is an ideal starting point for the exploration of Aegean. The island, which is west of Naxos and east of Antiparos, is elliptically shaped, with 168 kilometres of coastline. Ferries arrive at our island in just a few short hours, and it is well connected to multiple destinations. The island infrastructure comprises a port, airport, marinas, public services, banks, post offices, local transportation, etc. The main port and anchorage are situated in Parikia, the capital of the island. Naoussa and Piso Livadi both operate marinas from which excursions to Naxos and neighbouring islands depart. The port of Pounta connects Paros and Antiparos.

Both private and public health services are offered. Private doctors and pharmacies can be found in almost every village. Paros has an aircraft dedicated to health care for free emergency air transport.

The network of roads is among the best in the Cyclades. There are several regular bus routes, as well as many taxis and automobile and motorcycle rental agencies. Although the entire island can be toured in a few hours, there is always something new to discover.

Paros has numerous beaches including Chrissí Aktí (Golden Beach) near Drios on the east coast, at Pounda, Logaras, Piso Livadi, Naousa Bay, Parikia and Agia Irini. The constant strong wind in the strait between Paros and Naxos makes it a favoured windsurfing location. 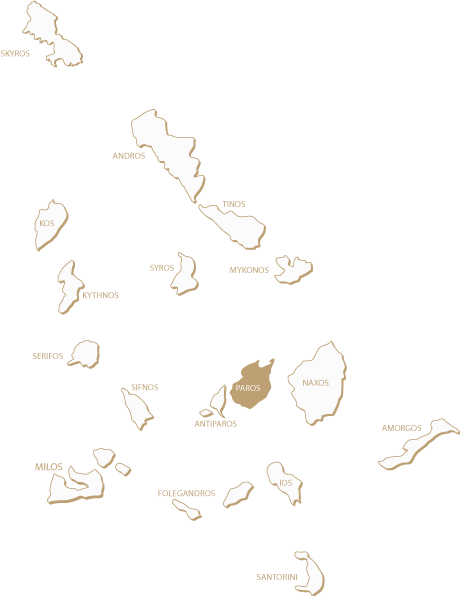 SEARCH PROPERTIES
IMPORTANT INFO
AIRPORT
PORT
MARINAS
MEDICAL CENTRE
PRIVATE MEDICAL CARE
ROAD INFRASTRUCTURE
VARIETY OF BEACHES
HIGH END GASTRONOMY
CONNECTION WITH NEIGHBORING ISLANDS
OUR OFFICE IN PAROS
Our branch office in Paros is located at the central square of Naousa, just aside the well-known Stone Bridge at the entrance of the village. We would be glad to meet you!
OUR OFFICES